Rotherham Council will be holding a drop in session in Dinnington next week to tell local residents about plans to build new houses and industrial units over the next 15 years.

Please do go along and have your say, also look online at http://rotherham.limehouse.co.uk/portal/planning/sp/finaldraftsandp and register your views for the record.

I would urge everyone who cares about our local area to take part and have your say, it’s no good doing nothing now and moaning later folks!

One of the more surprising elements of Rotherham Council’s Local Plan, this development would see a huge amount of local green belt beside the new A57 roundabout converted to an industrial site almost as big as Todwick itself.

Have your say on the consultation here.

The final chapter of the Local Plan consultation has now begun! Rotherham council have revealed full details of the sites that will see new housing and commercial development over the next 15 years, much of it on our green belt.

Some of the highlights:

1. 240 new homes on fields behind Wentworth Way, Wentworth Way to be converted to a through road to service the development.

2. Hundreds of new homes at Throapham on fields behind Dinno Comp.

3. Miners Welfare ground to be partially sold to housing developers after a secret deal struck by Dinnington Town Council and MP Kevin Barron.

5. Pasture land in Anston to be used to housing.

6. Gypsy Camp to be built in South Anston near Kiveton Station.

Have your say on the proposals by clicking here.

The report in full is here.

“Dinnington East, will be removed from the Green Belt”

Dinnington has “the character of a small, bustling town with frequent bus services to
Rotherham and Sheffield”

Greenbelt land to the east of Dinnington (Lakeland Drive area) will be used as this is easier for developers to build on.

The high quality agricultural land will be worth losing as it means 700 houses can be build right next to Lakeland Drive.

No new schools, doctors, road or other infrastructure.

Other areas would have required a larger investment in schools, etc. from developers.

Rotherham Council have unveiled their latest “consultation” in responses to comments made on their local plan by a government inspector who must approve before the house building on greenbelt extravaganza can begin.

1. No priority given to brownfield first, lots of people even greenbelt campaigners believed the Council when they said they would go brownfield first, but they have now confirmed what a lot of us always knew, there is no instrument left in planning law to do this.

2. The Council intend to set the level of Community Infrastructure Levy (a charge developers must pay to contribute to local infrastructure) ridiculously low in Dinnington and North Anston. It will be cheaper for developers to build on our countryside than derelict council estates in Sheffield.

3. An extra 200 and odd houses planned for Dinnington, the majority on greenbelt with no investment in local amenities and infrastructure.

4. No new retail developments, just 16% of Rotherham’s industrial units that will be moved out here.

5. Five percent of all houses in Rotherham to be built on our green belt.

Have your say on the consultation HERE.

RMBC Cabinet have put forward plans to raise Council Tax by approximately 2% for the next year, raising an additional half million or so of revenue.

1. Dinnington Town Council up in arms over (proposed) closure of Sure Start centre.

2. Anston Town Council a bit less so, Councillors saying that the centre was not well used and Anston is not a deprived area. Hmmmm!

3. Dinnington Town Council refuse to record a vote of confidence in Dinnington’s relationship with RMBC.

5. Rotherham Council refuse to transfer Birkdale Avenue playing field to local ownership, say they want to hold onto the land for commercial reason as it may be used for a housing development.

The developer Taylor Wimpey has revealed it’s plans to develop the Rotherham Council owned playing field at the end of Birkdale Avenue. 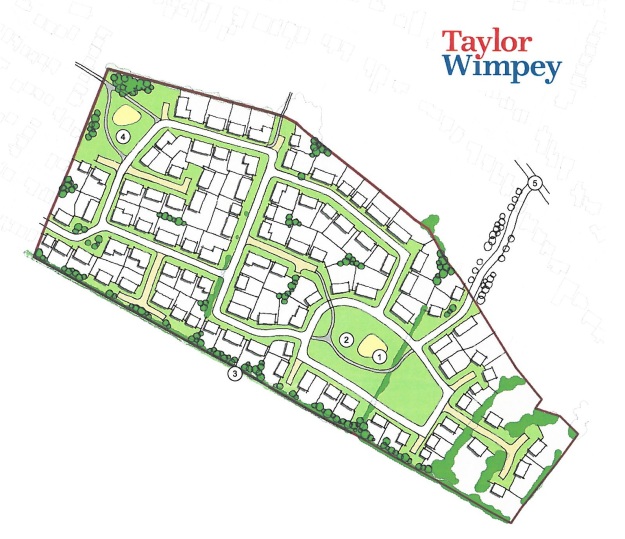 To summarise they plan to build a load of houses over it and replace it with a much smaller open space a long way from where local children play currently.

This is where the plot lies: 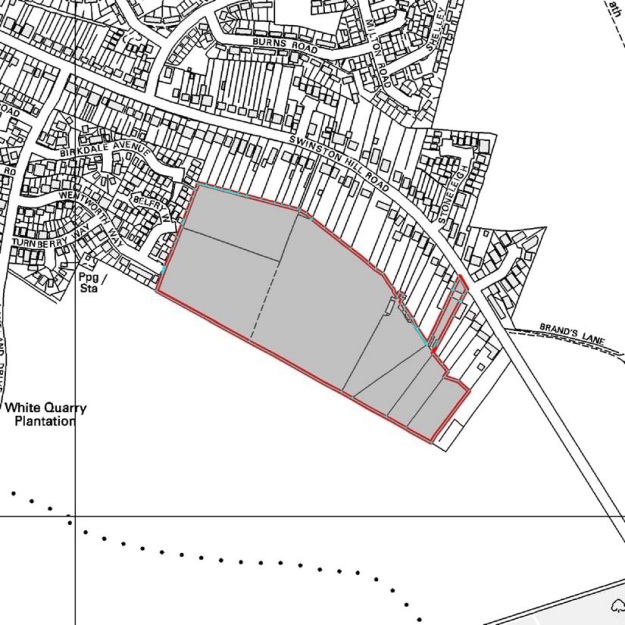 Having been previously told by the developer that they had no interest in the playing field I am not happy, I am also less than thrilled with Rotherham Council who seem to be willing to see what little recreational land we have left built on.

Well last week I handed in 150 evidence forms claiming the footpaths that people currently use on that land, so I hope the owners of the new houses will be OK with me walking through their back gardens and riding my bike through their dining room.

My response to Jo Burton was in the Advertiser and Guardian this week, the Advertiser especially read like a Victims of RMBC Support Group meeting, not much love for the Council this week! 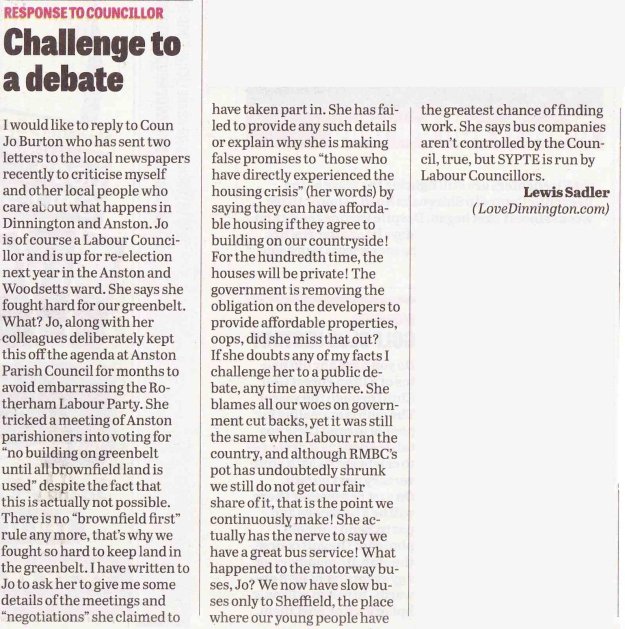 Jo has sent me another reply so for balance I am happy to reproduce it here. 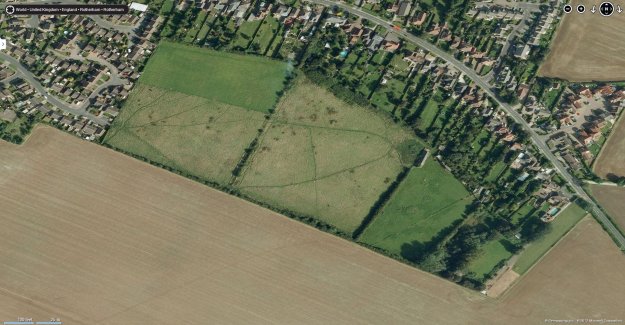 This land has been used by local residents for walking, cycling and horse riding for decades, but none of the footpaths we use are legally recognised, therefore access to many of the footpaths could be lost if the houses are built.

We would like to see the local paths recognised legally by having them placed on the Council’s definitive map. You can help by filling in the witness statement on our leaflet if you have used any of the footpaths shown overleaf for the last 20 years or more. We will then present this to the Council as evidence that the paths should be entered onto the definitive map. The Council have a legal duty to investigate our claims.

We are distributing our leaflet locally to ask for support from the immediate community who use these paths regularly (or semi-regularly, that’s still valid!) You can ALSO DOWNLOAD IT HERE!

The slick, sophisticated marketing machine at our disposal has swung into action (me on my bike)

The paths are shown below: 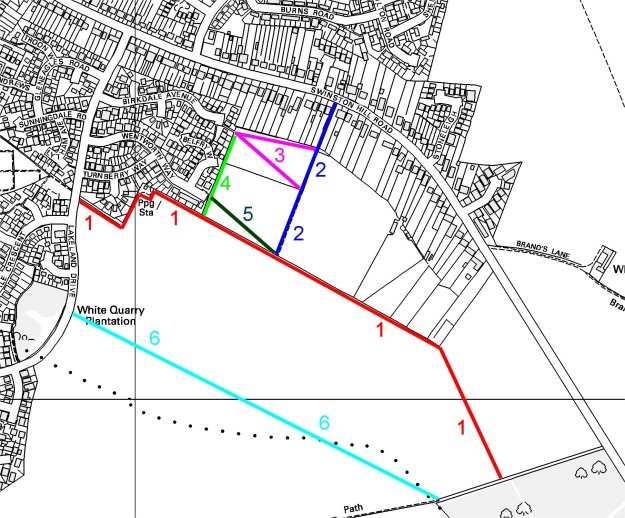 To enter a valid claim for these footpaths we need to prove at least 20 years usage.

The consultation for the final lap is now here and we can reproduce RMBC’s plan for Dinno below:

Just a quick point to dispel a myth that keeps going around… None of these houses will be built by the Council, they are all private. RMBC would like us to think they can use existing laws to force the developer to build them 20% affordable or social, but the government is in the process of abolishing this rule. Greenbelt sites are prime locations and will almost certainly provide 4-5 bedroom “executive” homes.

They appear to have dropped the idea of a massive urban extension near Lakeland Drive.

What is happening to Dinnington Rec Ground?

Space for 200 or so houses reserved in Anston

My Tweets
LoveDinnington.com
Blog at WordPress.com.