Housing developers are seeking to open a new housing development in Dinnington which would be the largest by far since Limelands. 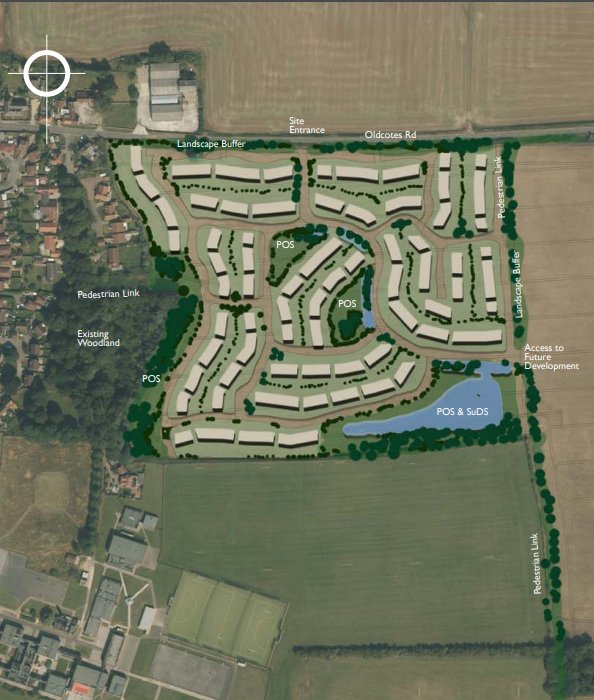 The fields surrounding Dinnington High are all now earmarked for building, with the one next to Throapham woods coming forward first. This would be initial development in the range of 250-350 homes, depending on density and would over 10-15 years scale up to an eventual total of around 850.

How sustainable this will be depends on lots of factors, not least the local market. Housing in Dinnington is by and large pretty inexpensive and in good supply. Any housing developer entering this market won’t want to flood the area with hundreds of houses all at once, after all why drive down the price of the commodity that you’re selling.

More likely that even this initial development will be phased over 3-5 years, like the one due to begin at Wentworth Way. Homes will be built gradually and sold as they go, with new residents moving in while building work progresses on the surrounding houses.

Let us now what your opinion is, do you welcome new homes and new people to the area, or are you conscious of the increased pressure on roads or school places? Leave your comments below!

The barbarians have appeared on the horizon in the lovely village of Woodsetts in the shape of INEOS, the company who want to frack the hell out of South Yorkshire.

Gas drillers INEOS have followed up their appalling proposal for a test well in Harthill’s countryside with a second site for test drilling, just down the road from us in Woodsetts. This will only be the beginning as they look to embark on a 5 year rape of our countryside in both locations with a drilling rig the size of Big Ben.

Our local politicians have come running to our aid yet again with local Councillors doing what they always seem to so (f**k all frankly) and our MP Kevin Bas… I mean Barron still picking the splinters out of his arse from sitting on the fence.

The Harthill well has progressed to a full planning proposal whereas the Woodsetts site is still in the very preliminary stages.

The wells are not fracking as such, at least not yet. They are applying for a 5 year visit to drill a vertical shaft about 3000 metres into the earth to recover a core sample of the local geology. They will then use the well for a series of tests to further determine the viability of wholesale gas extraction via the controversial fracking technique.

What can locals expect from the 5 year stay?

It’s quite hard to see an upside at the moment, we will be doing a series of articles on how to object to the planning application when it appears. In the meantime please tell your friends and urge your elected representatives to get behind local people for once and oppose this madness.

Both villages have active campaigns (links below) and I would encourage you all to give them every support you can.

The Bas… Sorry I mean INEOS

INEOS on how they will run the site in Woodsetts A couple of new sites have emerged for housing in central Dinnington near Tesco. They are green space, but not protected greenbelt and are bound to be less controversial than others as they are near to public transport and shopping.

If you have any opinion on these sites or others be sure to let Rotherham Council know as there is only a few weeks left on the consultation. Do you use any of the land we’ve covered for your recreation, or would you like to buy a house there? Either way have your say here.

The Bulldozers moved to demolish the remains of Park House, the Dinnington Miner’s Welfare this week but sources involved in the recent secret meeting between Kevin Barron MP, Dinnington Town Council and the Coal Industry Social Welfare Organisation (CISWO) indicated today that a new Miners Welfare could rise from the ashes.

The price to be paid? One third of the prime land surrounding the institute must be sold to developers to build new houses adjacent to the High Nook estate.

However not all of the Town Council were present at the meeting so it is unclear how they as a body have agreed to this undertaking. Also a split has opened in the Friends of the Miners Welfare group as two of their membership were thrown out of the meeting when Sir Kev spat his dummy out and refused to tolerate their presence.

A source close to Sir Kev explained that there is precious little love between our local MP and firebrand ex NUM official Dave Smith which may go some way to explaining events.

Meanwhile Dinnington Town Council will at its next meeting consider this application to knock Park House down. WHY HAVE A PLANNING APPLICATION TO KNOCK DOWN A BUILDING WHICH IS NOW A SMOKING CRATER?

WHY NOT HAVE A PUBLIC MEETING AND LET ALL OF DINNINGTON HAVE A SAY SIR KEV?

Muppetry becomes mayhem as we try to make sense of this Barronesk carbuncle of blunders.

The consultation event at Dinnington Community Primary was a bit of an eye opener, this was of course our chance to find out about the plans to close children’s centres in Dinnington, Anston, Kiveton and Thurcroft, and a chance for all to air their views.

Parents and staff from the Children’s Centre were joined by local ward councillors, town councillors and two members of the actual cabinet from the Town Hall itself, Children’s Services supremo Paul Larkin and Deputy Leader Jahangir Akhtar.

Local activist Dave Smith was also present and was unsympathetic to the Council’s case for closing all the Children’s Centres in the Rother Valley South Area. Cllr Larkin threatened to close the meeting and take his ball in if any one tried to make a political point, Cllr Akhtar accused Mr Smith of showing no respect (A bit rich given Cllr Akhtar’s criminal conviction for assault, but never mind)

The lady chairing the meeting kind of lost her credibility when she admitted to a parent that they didn’t actually know how well attended each centre was.

She also told us that the service would improve despite any closures so a parent asked then why not close all the centres if the mystery alternative is better. Again no answer!

Firebrand independent Cllr Stuart Thornton was next, pointing out that the consultation was a  bit of a fix given that Cllrs had already voted for the cuts by approving the budget. This was met by howls of protest from the cabinet members and Cllr Jacquie Falvey (who had stayed obediently quiet throughout the previous exchange)

Cllr Paul Larkin settled the issue by admitting that yes the money has already been cut from his budget, but that if the “consultation” decided the centres had to stay open he would cut it from somewhere else in the Children and Young Persons budget.

Sort of robbing Peter to pay Paul! (Paul Larkin, get it? Not sure who Peter is…)

The Cllrs from Dinnington Town Council also held their tongues, thanks for your help there ladies and gentlemen! Not.

At this point I had to leave to pick my daughter up so cannot report further on the proceedings.

I never got the chance to air my views, but I fear they would not have been important to the cynical self serving officials and Labour Councillors who frankly give not one jot for the children of Dinnington and Anston.

It felt like a war of attrition tonight at Anston Parish Council as Cllrs and Agitators alike lost theirs rags and in some cases stomped out early from a venom filled poison fest of a Parish Council meeting.

The Council’s bussed in support barely made it past the starting line.

1. Councillors cautiously welcome the possibility of an extension to the side of the Cutler pub, saying it could bring business into the area. Much scorn was poured on the rumour that Tesco may acquire the site, time will well.

2. Councillor Jo Burton lamented the (possible) loss of Anston’s Sure Start centre, when asked why she voted for it in the full Council budget she fumbled and blamed the government, Wonder if she voted to cut her own allowances as well? No thought not!

3. Cllr Brindley says many of the Sure Start children come from “suspect families” which I’m sure will endear her to all those who attend. My wife went to Sure Start centres, does that make us “suspect”? On second thoughts leave that one!

4. A presentation by the “Independent Person” appointed by RMBC to sort out the wrong doings at the Council was given a mixed reception. Whilst most Cllrs and members of the public wanted him to continue there was grumblings that complaints were being brushed under the carpet.

5. Cllr Jo Burton admitted finally that she was talking tosh when she offered to make all the housing developers use brown field land before raiding the greenbelt. Glad you finally read the law and caught up with the rest of us Jo!

There was more but I made my excuses and left before my soul was further corrupted and hightailed it back to Dinno.

My Tweets
LoveDinnington.com
Create a free website or blog at WordPress.com.