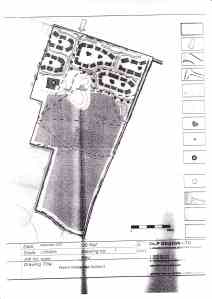 In our latest article on forthcoming house building plans for Dinnington we focus on the Lorden’s Hill area and the Miners Welfare in particular.

The Welfare is not just the now demolished Park House of course, it consists of a large recreational field and is owned by a massive charity called CISWO. It was of course originally owned by the Dinnington miners but after the coal mining industry collapsed CISWO went around hoovering up assets and managed to grab themselves quite an empire. The land is currently greenbelt.

Now a secret deal has been reached in Dinnington to allow the demolition of Park House to go ahead unopposed and for a third of the welfare to be sold to housing developers. Some of the money would hopefully return to the town to allow the building of another community centre on the site. CISWO would still retain ownership of all the land.

The deal is supported by Dinnington Town Council, Kevin Barron MP and CISCO, along with some local citizens of Dinnington. No guarantee exists as far as we know that the money will find it’s way back here, or how much of it the town will get.

As part of the wider development Leicester Road may be joined onto the High Nook estate, although as far as we are aware residents are yet to be consulted about these plans.

Across the road from the welfare is a further piece of greenbelt coloured blue on the photo, this will be reserved for future houses beyond 2028.

Please let us know your opinions on the plan, what do YOU think would be god for the area?

The Bulldozers moved to demolish the remains of Park House, the Dinnington Miner’s Welfare this week but sources involved in the recent secret meeting between Kevin Barron MP, Dinnington Town Council and the Coal Industry Social Welfare Organisation (CISWO) indicated today that a new Miners Welfare could rise from the ashes.

The price to be paid? One third of the prime land surrounding the institute must be sold to developers to build new houses adjacent to the High Nook estate.

However not all of the Town Council were present at the meeting so it is unclear how they as a body have agreed to this undertaking. Also a split has opened in the Friends of the Miners Welfare group as two of their membership were thrown out of the meeting when Sir Kev spat his dummy out and refused to tolerate their presence.

A source close to Sir Kev explained that there is precious little love between our local MP and firebrand ex NUM official Dave Smith which may go some way to explaining events.

Meanwhile Dinnington Town Council will at its next meeting consider this application to knock Park House down. WHY HAVE A PLANNING APPLICATION TO KNOCK DOWN A BUILDING WHICH IS NOW A SMOKING CRATER?

WHY NOT HAVE A PUBLIC MEETING AND LET ALL OF DINNINGTON HAVE A SAY SIR KEV?

Muppetry becomes mayhem as we try to make sense of this Barronesk carbuncle of blunders.

1. Dinnington Town Council insist their policy of objecting to RMBC’s Core Strategy still stands, but what of their policy of opposing building on greenbelt. The housing developer will NOT be building on the demolished Park House, they want the field adjacent to High Nook.

2. Local Councillor says they do not usually condone building on greenbelt but the possible investment from the sale of houses may be worth it if local people get a new community centre or playing fields from the deal. BUT nothing has been agreed and no investment has yet been promised,

3. Our local MP Kevin Barron refused to chair the meeting until two ex-miners he doesn’t like were TURFED OUT.

4. The meeting was said to be “not secret” but it wasn’t exactly public either. No minutes were kept. We say it should have been a public meeting so all of Dinnington could have their say.

The Friends of Dinnington Miners Welfare threw out two of their members in mysterious circumstances before before it could start. Depending on who you talk to the chucking out was either done by one of the Friends or Kevin Barron. More on that as we get it.

The meeting heard that what’s left of Park House will be demolished with CISWO and RMBC set to disagree on who should pay for it. One third of the surrounding green field site would be sold to developers, the remainder being leased back to Dinnington but it is unclear at this point whether receipts for the sale would be invested into the site or taken away from Dinnington.

Possibilities include the Friends receiving money for a community centre and houses for retired miners.

CISWO acquired the site approx 8 years ago as they hoovered up assets left behind as the miners organisations withered nationwide.

The site is registered by the Council as a community asset, so much for that one!

More details as we receive them!

Dave Smith the independent candidate for the local elections has been remembering the miners strike, something that played a very large part in my own childhood.

Even now it sends a shiver down my spine when I ride my bike up past the ruined Miners Welfare, you can feel the neglect and disappointment hanging in the air. I can only imagine how this makes the miners feel, those who remember its hey day.

Many people in Dinnington didn’t rely on the pit and life for them continued, but for a large part of our community what was taken is yet to be replaced.

Saw this thought provoking piece by a Dinnington-born photographer Stuart Bingham and thought I would share.

“Seeing one of the most important places of your childhood in a complete state of dereliction is a saddening thing.”

“The destruction of the ‘welfare’ is not, as some would have it, a comment of modern youth.  It is a sad indictment of modern adulthood.”

“That modern men and families have allowed the building to descend in to its current state is the really shame and stands as a testament to what has been lost, not just in Dinnington, but in working class communities across the north of England.”

A favourite of mine for a bike trip, Dinno Miners Welfare and Rec Ground is owned by CISWO, in fact this is a bone of contention for many people who feel that CISWO hoovered up the Rec Ground along with other assets when the coal industry collapsed.

Now word on the pit top is that CISWO are planning to develop houses on the land, will any of the money made be put back into Dinnington I wonder? The Friends group setup to run the Welfare have now been locked out by CISWO who declined the opportunity to renew their lease,

Here’s a photo of the place in happier times and a past newspaper story which gives a flavour of the controversy.